405/605 Tea Party Patriots
Present:
Why Everyone * Especially the Young Should Be Concerned About Our National Debt.
7:00pm Thursday April 11th. 2013 - Rush Park in Rossmo0r.


3001 Blume Drive, Rossmoor, 90720. From Seal Beach Blvd.,  turn West on St. Cloud which turns into Montecito.  Turn West on Mainway.  You will see the Park and auditorium on your Left after a short drive. There is parking adjacent to the building and plenty of street parking.  Please RSVP so we can have the seats we need.  Students get preferred seating.  Bring your questions!

Please note the change of Venue and Day! 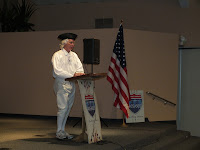 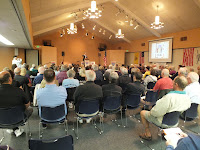 Bill Whittle
Many politicians are treating the National Debt as if it is unavoidable, calling it a process of any political system and something we can live with.  But history has taught us otherwise.  Debt is a burden on the future of any generation and any nation.  Why are the money masters allowing this debt to grow?  How can we pay it back?  Currently, every citizen owes $50,000+ to our national debt. It will have to be paid.

As a non-partisan educational group, the 405-605 Tea Party Patriots will present nationally known speaker Bill Whittle to explain why the debt should concern every citizen, especially the young.


We invite you to our meeting, which will be held on April 11, 2013, 7:00 P.M. at Rush Park Auditorium in Rossmoor.  We are also inviting concerned students from nearby high schools to attend this meeting, because our national debt concerns their future.


We will start off with a fifteen minute presentation about George Washington’s Farewell Address.  His timeless message is filled with wisdom that is of benefit to people of all ages.

Bill Whittle is considered by many politico insiders to be the hottest up and coming conservative political commentator and American heritage philosopher of his time. Bill's factual, logical, and non-adversarial approach leaves people motivated and fully informed. His ability to personalize and interpret some of the  most complex political and moral issues of the day, with humor and historical example, are unique in a world of ever-increasing vitriol and personal attacks.

Bill is being hailed for both of his thought provoking video essay series known as the FIREWALL and AFTERBURNER.  One of his AFTERBURNER segments on You Tube has, to date, generated nearly two million views alone. In his FIREWALL collection, the WHAT WE BELIEVE series on Conservatism has been widely acclaimed as a complete civics lesson in seven segments.

Bill can be found at his new web home www.billwhittle.net  and at the
Bill Whittle You Tube Channel: www.youtube.com/user//BillWhittleChannel

Lectures Start at 10a.m. Lunch will be provided.
A $10 donation to offset speaker fees, lunch and expenses is requested.

Our Seminar speakers will be Rosa Koire, (Author of Behind the Green Mask) Warren Duffy (CFACTSOCAL) and Orlean Koehle (Author of By Stealth and Deception).  Our Speakers will educate us on U.S. Agenda 21 and ICLEI. (International Council for Environmental Initiatives) and how it is infiltrating our Schools, Cities, Counties and States. Why our Politicians are voting our Liberties away, knowingly or unknowingly.  Why we must educate our Candidates who are running for office so they can recognize these issues when they come up for vote.
United Nation's Agenda 21 is a program developed by interests outside the United States that seek to establish influences and controls of our homes and local governments, at every level.
These interests will affect community planning. property rights, utility Services, including water and sewer, energy production use, and trade. Some controls have already been adopted by various governments! At first look, the Agenda's goals seem reasonable and altruistic.
The Agenda keeps changing, but has never decreased in it's scope. This continual growth has caused concerned citizens tho study the advancement of the Agenda, which has avoided the proper debate and ratification in the Senate. All citizens should be aware of this Agenda. After all, what should we expect from a group that had placed Libya on it's Human Rights Commission?